Members of the Belize Amateur Radio Club (BARC) have participated in JOTA/JOTI 2017 alongside a group of scouts eager to communicate over the air on the ham bands.

largest scouting activity of the year. During the event, scouts from all over the globe gather in their respective troops to communicate with other scouts using radio and the internet. The communication exchanges during the two-day event helps to promote peace and understanding among mankind.

The venue for this year’s activity was the Scouts Association Headquarters in Belize City. There, BARC participants assisted by providing ham radio equipment and communications know-how to the young scouts. Successful over-the-air ham radio contacts were made with various countries in the region including: Mexico, Costa Rica, Dominican Republic and the USA.

inclined scouts by introducing them to Echolink. Echolink is an internet communications tool that allows registered ham radio operators to communicate with each other via voice and chat.

At the end of the event, administrative officers of Scouts Belize and members of the Belize Amateur Radio Club agreed that there is plenty of room for ham radio development and cooperation between the two institutions.

Specific areas of cooperation discussed included training for scouts who can serve Belize as emergency communicators if there is a collapse of the normal communications infrastructure; as recent events in the Caribbean have demonstrated.

The Belize Amateur Radio Club (BARC) has started to monitor the movement of Tropical Storm Harvey as it makes its way across the Caribbean Sea. Meteorological forecasts indicate a storm path directly to Belize.

Emergency two-way communications, such as those provided by BARC members ( who are also called Ham Radio Operators), may become vital following the passage of a powerful storm. BARC members have therefore trained and stand ready to assist if called upon to provide emergency radio communications.

At the announcement of an imminent landfall of TS Harvey by the Meteorological and National Emergency Managers, BARC will proceed to use the frequencies of 7.177 MHz and 147.000 to relay emergency messages within Belize. We will also use internationally allocated ham radio frequencies to relay emergency traffic.

Engineering Students at the University of Belize have been given an Introduction to Amateur Radio by members of the Belize Amateur Radio Club.

The introduction was held at the University of Belize (UB) Engineering Department in Belize City and included a summary of BARC´s educational goals, a short video, a lesson on ham radio basics (such as propagation and the radio frequency spectrum) and a question-and-answer session. 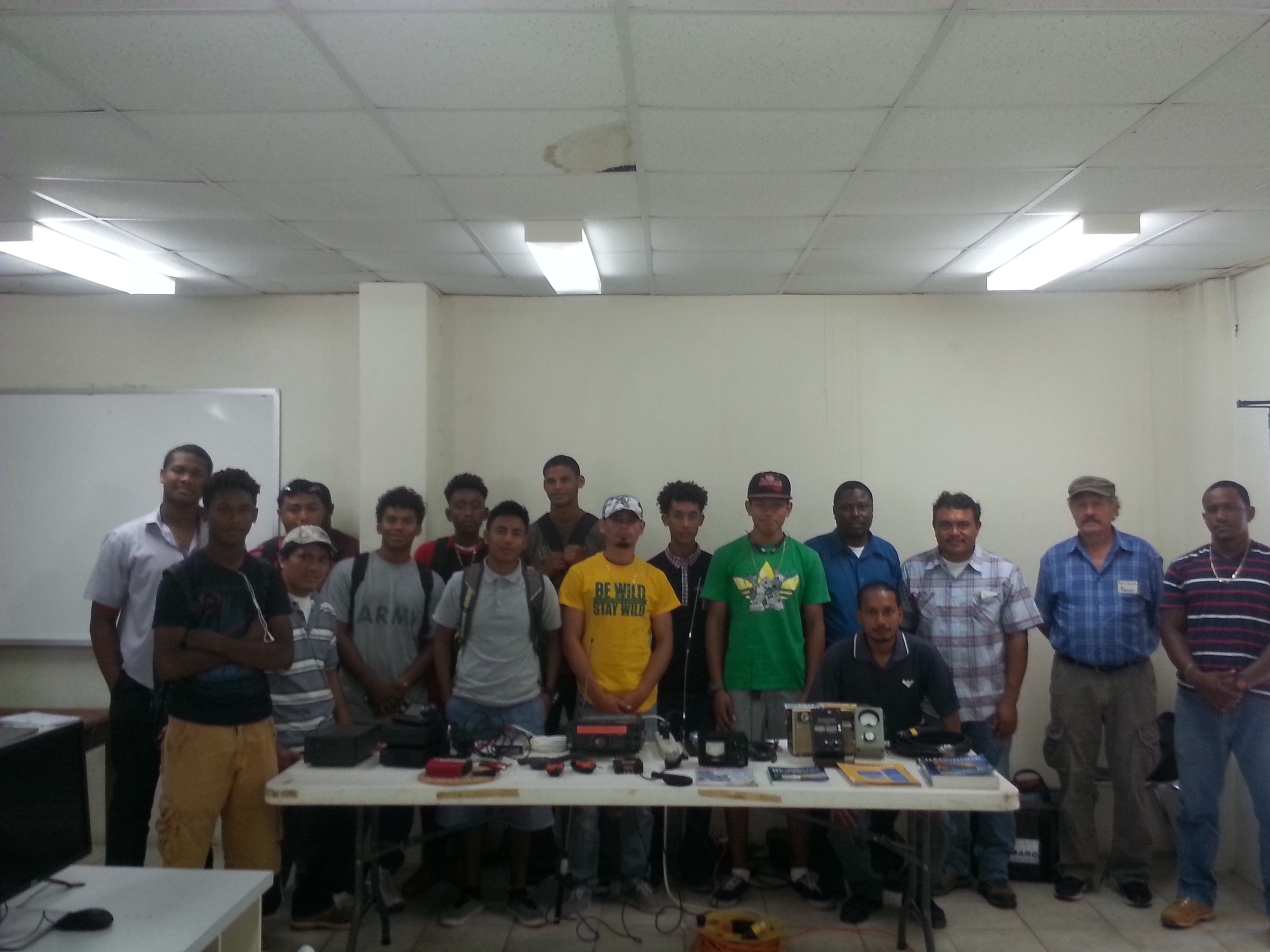 BARC President Emil Rodriguez, V31ER, encouraged the young students to grasp the opportunities that Amateur Radio offers to expand their skills in their field of study, Mechanical and Electrical Engineering Technologies.

The introduction represents the first step towards establishing a partnership between BARC and the UB Engineering Department. It is envisioned that through this partnership students will learn specific skills that include building simple antennae, exploring electronic circuits, practicing voice procedures, and learning theory necessary to obtain their ham radio licenses.

The establishment of a permanent Ham Radio station at the UB Engineering Department would be a first and could greatly enhance the educational capacity of the institution. It would also allow students to contribute to their community by engaging in emergency radio communications during hurricanes that affect Belize.

Members of the Belize Amateur Radio Club will be pleased when they receive their 2017 certificate that features the ancient Mayan ruins at Altun Ha.

Altun Ha is one of Belize´s top tourist destinations and the site offers a unique insight into the Mayas who occupied that area for many centuries; from about B.C. 900 to A.D. 1000.

The ruins are located on the north-central coastal plain of Belize about 30 miles (50km) north of Belize City and about 6 miles (10km) west of the shore of the Caribbean Sea. While the site was in existence for centuries, it did not come to the attention of archaeologists until 1963. Since then it has come under official management and regular tours are available to the adventurous at heart.

The BARC Membership Certificate for 2017 features the largest of Altun Ha’s temple-pyramids, which is the “Temple of the Masonry Altars”. It rises about 54 feet (16 m) high.

Along with the certificate, full members will also receive an official BARC t-shirt.

The Belize Amateur Radio Club (BARC) congratulates all Belizeans on the country’s thirty-fifth (35th) anniversary of independence from Great Britain. Since 1981, this tiny Central American and Caribbean country has embarked on the bold adventure of nation-building that has seen it work in peaceful partnership with the international community, participate in global projects to improve the understanding of other peoples and cultures, and welcome new faces to share our shores.

Belize’s unique geographical position, its natural beauty and the many successes of its people continue to attract interest from many persons throughout the world. Thirty five years after independence on September 21, the Belizean story continues to unfold. With ‘wealth untold’ and promises of peace and happiness, Belize is a land for all to enjoy in cultural harmony.

September is also special for the Belize Amateur Radio Club as it is the month when our activities took off at an exciting pace. Along with the first exciting steps there was also the building of new partnerships, friendships and understanding as we leaped to attain our goals.

The first handshakes of partnership and communication continue to bear fruit for BARC. But its officers and members have not sat on their laurels or settled comfortably to relax. Work continues in building even more friendships, recruiting young members, enhancing our member services and developing better strategies to provide emergency communications assistance in times of need.

Hurricane Earl made landfall near Belize City, Belize, during the early morning hours as a category 1 storm. Earl has since weakened to a tropical storm. The Hurricane Watch Net (HWN) plans to resume net operations on 14.325 MHz on Thursday, August 4, at 1200 UTC for Earl. The HWN activated on August 3 as Tropical Storm Earl was headed toward Central America. On its current path, Earl will pass into Southern Mexico by early Friday.

“We will resume net operations for the purpose of gathering post-storm reports and offering emergency and priority traffic assistance,” explained HWN Manager Bobby Graves, KB5HAV. The net typically closes once a storm has made landfall.

On Wednesday, the HWN activated simultaneously on both its primary frequency of 14.325 MHz and its backup frequency of 7.268 MHz, because of poor 20 meter propagation.

The Belize Amateur Radio Club (BARC) was tracking the storm as it approached Belieze. BARC announced that its members will be using the using the frequencies of 7.177 MHz and 147.000 MHz to handle emergency traffic within Belize, in addition to other frequencies “for external contact where necessary.”

A recent press release issued by the International Amateur Radio Union that may have caught the interest of some of our members has been clarified.

The statement made in the IARU Press Release that “BARC does not exist” refers to a previous entity that called itself the Belize Amateur Radio Club, which has been dormant since at least 1993. As an administrative procedure the IARU issued the press release to the public so as to inform them that the previous entity calling itself the Belize Amateur Radio Club is not recognized as a functioning organization within the regional union.

The “old” Belize Amateur Radio Club has therefore been dissolved and is not recognized. Along with the dissolution of the “old” BARC, any obligations that may have been incurred or outstanding to the IARU have also been struck out.

Within the same Press Release an invitation has been extended to any group of Belizeans who may want to submit an application for a “new” club under the guidelines and procedures of the IARU.

A “new” BARC, registered as a non-government organization under the laws of Belize and having obtained sufficient membership, has been in correspondence with the IARU since its official activities commenced in September 2015. The “new” BARC seeks to gain official recognition and affiliation with the IARU so as to better serve our members and extend our membership base; especially with young people of Belize.

We are confident of our objectives and we hope this clarification of the IARU Press Release that was an administrative procedure is well received by our members and the radio community.

We are proud to announce that Belize Amateur Radio is now Non Governmental Organization!! After so much waiting and paper work, we have achieved a major milestone in the history of BARC. Below are the certifications attached.

Students from Saint Thomas More Cathedral School (STM), located in Arlington, VA, have developed a Slow Scan TV ( SSTV) CubeSat and is set to be deployed from the International Space Station ( ISS) on March 7, 2016.

STM takes pride in what is thought to bet the first Elementary school to devise their own satellite. The project consisted of Pre-Kindergarden, Kindergarden and First Grade students being involved in this milestone.

Middle School Students took the initiative to begin the exploration on how to receive data from the CubeSat and thus a Ham Radio Club was formed. As a result of the club, they learned the basics of operating a Ham Radio Station and explored the field of Slow Scan Television as an option for receiving images from this satellite.

Its a wonder… How did 400 Grade School Students build a Nano Satellite?